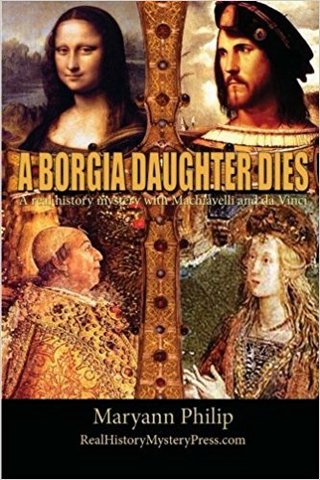 Truth is stranger and more interesting than any fiction that could be written about the flamboyant, creative and violent crucible of modern history known as the Italian Renaissance. The history you will read here is accurate, factually and chronologically, with rare exceptions noted in the Afterword. Historical persons, identified in the Cast of Characters at the end of the book, meet only when they did in real life. None has been moved further than across Rome, where necessary for the story.

The fisherman spotted the corpse bobbing in the Tiber, in the dark eddy where bodies began surfacing after Rodrigo Borgia bribed his way to becoming Pope Alexander VI. Above it loomed the pope's massive brick prison, the Castel Sant'Angelo, a dark silhouette against the gray dawn. Disembodied laughter floated down from the battlements as night torches winked out like fireflies. The day sentries were coming on duty. Soon, they would be able to see him.

Like all good oarsmen, Giorgio rowed with his back to his goal. Imagining where the corpse would be, he rowed quietly toward the pope's prison, feeling as though unseen eyes—some living, some dead--were searching for him. It was still too dark to see, but could they hear his oars? The guards' voices, unnaturally loud in the damp stillness, gave no sign that they did.

Fear made Giorgio sweat, despite the morning chill. They had already beaten him once, for failing to report the death of the pope's oldest son, Juan Borgia--though Giorgio told them repeatedly that there were too many dead in the Tiber to notice one in particular. To avoid more beatings, he now caught corpses as well as fish. He also searched the richly-clad ones, since Juan Borgia's mangled remains bore jewels and a rich purse, along with all the stab wounds. So the pope's soldiers had told him, anyway. But meddling with the dead had paid him only in nightmares, so far.

Giorgio's fear gave way to surprise, when he turned to gauge how close he was to the corpse. He was nearly atop it—and it wore the white habit of the Dominican order, faintly luminescent in the first light of day. Madre di Dio, this one was a nun! He stowed his oars to examine the bloated body, which smelled even worse than the sewage stink of the Tiber. The slit-eyed face, swelling from the nun's white wimple, was whiter than bread dough, and fruited with red pockmarks--fish bites, probably. Some pèssimi fish ate anything. He closed his eyes, trying not to gag.

Forcing himself to look at her again, he noticed the garrote, so tight around her veil and wimple that it threatened to behead her. What was an assassin's weapon doing around a nun's neck? Dead prisoners from the Castel Sant'Angelo landed in the Tiber, along with the garbage—but surely the pope would not bother with nuns. Did the vendettas that killed so many in the great families now include their women? Giorgio knew that the rich rid themselves of troublesome daughters by forcing them into convents. But killing a nun? That, he couldn't understand.

She had to be a runaway, he decided. Such a one might well carry money--how else would she start a new life? He groped in the chilly water for her purse, which was slimy and heavy with coins. Cutting it free, he quickly hid it in his fishnets, hoping the pope's soldiers were not watching. Then he towed the body to the pope's jetty, wondering who would kill a nun without robbing her as well.

Caterina Biaggi watched nervously from inside the shop as Leonardo da Vinci inspected the cannons her husband Ugo had manufactured to defend Milan against the imminent French invasion. She remembered da Vinci from the Duke's court because of his bella figura: tall and muscular, he wore his tunics only to the knee, his hosen tight, and his shoulder-length gray hair and beard groomed carefully into a wavy mane. Now dressed in browns and yellows, he reminded her of the lion in the Duke's animal park-- dignified and deliberate, yet powerful.

Da Vinci was inspecting the last of her husband's six bronze cannons, lined up like soldiers on the cobbled street outside the Biaggi workshop. Caterina, who kept the books, knew how much was at stake this day, and hoped for immediate payment. Otherwise, if the war went badly, they might not be paid at all. She watched anxiously as da Vinci peered into a cannon barrel, holding the candle so close to his bushy gray brows that she feared they would catch fire. When finished, da Vinci handed the candle to his apprentice, a delicately handsome young man with bleached blonde, shoulder-length curls, clad in a bright yellow tunic.

"Well done, Maestro Biaggi," da Vinci said to Caterina's husband Ugo as he entered the shop. "The casting is perfect. I would like to observe your technique sometime."

"There is no more metal to cast, for now," Ugo responded. "I know this bronze was intended for your grandissima statue, Sire. A thousand apologies."

"No apologies. The Duke has promised I can melt the cannons down again, after he defeats the French. My colossal horse can wait. I may hire you to help me with it!"

Trumpets sounded, drawing Caterina out the door to look down the street. Color and movement appeared in the distance: jugglers, and men in motley, carrying bright silk banners on long staffs. Behind them, lords and ladies in bright colors, a moving fresco framed by the brown brick buildings on either side of the cobbled street.

"Is the Duke coming?" she asked.

Da Vinci looked at her quizzically. "Si. To thank the armorers lining this street. And, to distract his loyal subjects from thoughts of the French."

He strode across the shop and grabbed a crossbow. "Do not worry, Madonna," he called to her, as he examined it. "He is unlikely to remember you, dressed as you are."

Caterina lowered her eyes. She was indeed worried about seeing the Duke—called Il Moro, "the Moor," by his people. They had ignored their mutual attraction when she worked for his brilliant Duchess, Beatrice d'Este, who later died in childbirth. Then the grieving Duke began plucking mistresses from the populace like wildflowers from the roadside--or so it was said.

She was seized with a sudden fear: if Il Moro saw her now, he might want her again. Her marriage to Ugo would not stop him. And if she succumbed, Ugo would kill her—or if he didn't, the Duke would soon discard her. Assuming the war with the French did not kill him first.

Just as quickly, she quelled her panic. She was too old to be all aquiver like a young maiden. The future of their shop was at stake. Da Vinci was right--it was unlikely the Duke would notice her, now. . . .