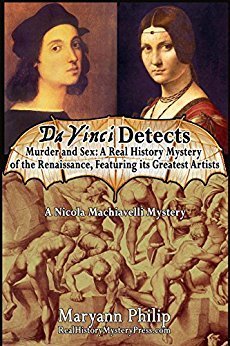 Truth is stranger and more interesting than any fiction that could be written about the flamboyant, innovative and violent crucible of mod¬ern history known as the Italian Renaissance. The history you will read here is accurate, factually and chronologically, with rare exceptions noted in the Afterword. Historical figures meet only when they did in real life, and do what they did in real life--apart from solving fictional murders, of course.

The Republic of Florence, Italy

Leonardo da Vinci, disguised in a black monk's cowl, peered through its hood into the dimly-lit morgue, torch held aloft.

"Buona sera, Tomaso! Do you have one for me this evening?

The flickering torchlight revealed a shadowy figure, undressing a body laid out on a stone slab. The dirty, burly man turned to face him, and grinned.

"Buona sera, Maestro. Si, you can have the one over in the corner," he gestured. "No one has claimed him. Maddalena is undressing him now. But you have to finish before morning. He is starting to stink. I need to get him into the ground."

Grimacing, Tomaso caught the coin da Vinci tossed, caressed it in his filthy palm, then tested it between two of his few remaining teeth. "You will sew him up good, si? The monks have sharp eyes."

"Of course. And I will wrap him well. Where are the shrouds?"

"I left several next to him. Use them all. That last one leaked."

Lowering his monk's hood momentarily, Leonardo wrapped a cloth around his face to ward off the stink of vinegar and rotted flesh permeating the wine cellar that the monks of Santa Maria Novella now used as a morgue. His white beard was already tucked into the stained tunic he wore beneath the cowl. Slung over his shoulder was a sack of paint- stained rags that hid his candles and dissection tools.

When he was ready, Tomaso lit another torch, and led the way. Da Vinci picked a pathway between tables where silent figures lay, framed by a network of brown brick arches that cast shifting shadows in the yellow torchlight. His boots made a sucking sound, loud against the stillness, as he pulled them away from the sticky floor. Cleaning them was always disgusting after these nights in the morgue.

He had grown used to the illusion that the dead were twitching, an effect of the torchlight. Some of the corpses were shrouded, some clothed, others naked. Several stank unbelievably; most had little odor. None frightened him. Controlled and rational, Leonardo was haunted only by memories.

At the far end of the chilly room, where several candles burned, an old woman was yanking clothing from one of the dead: a scrawny, open-mouthed man whose face, teeth and clothing were covered with mud.

"You don't need to wash him, Nònna. I will take care of it," da Vinci said.

She ignored him, glaring at Tomaso as she shook what looked to be a shirt at him. "Look," she said, her voice unnaturally loud in the stillness. "Is bloody, like the others! See? The mud will wash out, but not the blood."

She shook the dead man's tunic as well. "You see? Both are ruined!"

Tomaso took the garments. "Bah. Only a little blood. The tunic is dark. No one will notice. And the blood is only on the back."

"And this is very good cloth. Very fine workmanship."

"Bah. Is foreign. Half price."

"May I see?" asked da Vinci. Tomaso handed him the shirt, long-sleeved and made from fine linen. Unquestionably, it was bloodstained at the center of the back, around a small hole at the level of the heart. The deep green tunic was also of high quality, though covered with mud. Turning it over, da Vinci saw that the bloodstain had penetrated it. And it also had a hole in the back.

"You say this has happened before?" he asked the old woman.

"Si. Always foreigners. The first time, I didn't see it, for the mud. You won't fool me again!" She glared at Tomaso.

"How can you tell they are foreigners?" da Vinci asked.

"By the cloth. Is not Florentine cloth, and the tunic looks foreign."

She shrugged. "How should I know? Someplace else."

Da Vinci turned to Tomaso. "Where was he found?"

Tomaso grinned. "Looks like he was found in the mud."

"I don't know, Maestro. I just bury them. What does it matter, eh? Dead is dead."

Da Vinci pulled the corpse up by the shoulder, raising his torch to look at its back. Using one of his rags, he cleaned the clammy flesh be¬hind the heart. Almost invisible against the purplish lividity of death was a tiny wound, the size of a peppercorn, very close to the spine.

The old woman peered at the corpse. "Never saw any wounds. And I don't see one now. Your eyes are better than mine."

"Come, Maddalena," Tomaso said. "We will settle up outside."

"You are leaving him here with the dead, Tomaso?" She turned to da Vinci. "You are a brave man, Frate. What are you doing here?"

"You need not worry about me, Nònna."

She peered under da Vinci's hood for the first time, then quickly crossed herself, made a gesture to ward off the Evil Eye, and fled.

"You know where to leave the keys when you are done, Maestro," said Tomaso as he followed her out. "Buona notte."

The door closed behind them. Da Vinci was alone with the dead.

He put his torch in the nearest iron ring, then carefully folded and set aside his monk's robe, ignoring the chill in the subterranean air and a nagging worry that he would be caught and jailed. Lighting his candles with the torch, he placed them around the naked, muddy corpse. How odd, that it was soiled back and front. Had this man rolled in the mud in his death throes, or had someone dirtied him deliberately, to disguise both his face and his pinprick wound?

He rolled the corpse over, packed rags at its sides to catch fluids, and made his first incision. After half an hour, he held the corpse's heart in his hands. Sure enough, the wound had penetrated it completely. But there was no exit wound on the front of the corpse's chest. Either a rib had stopped the instrument, or the blade was short—less than a hand span in length.

From his earlier dissections, da Vinci knew that much of the accepted wisdom about the human heart was wrong. He had no doubt: this man had been murdered. And if the old woman was right, others had been murdered as well. Someone with a very sharp implement— thinner than a stiletto—was killing foreigners...